I wasn’t a fan of black-and-white (B&W) photography until a few months ago. Previously, I thought B&W is boring and plain. Until I saw many B&W photo exhibition and I’m blown away. Of course, many digital BW are edited to achieve a certain feel. I am guilty of that. Since I also shoot film, I need to know how to achieve that ‘feel’ without touching digital editing tool.

Hence, I started reading up and determine to learn how to create a black-and-white images that would impress myself. But before I really master the skill to share, I would like to ‘convince’ and invite you to join me in learning, if you haven’t. Here is why you should also learn to shoot black-and-white film:

Colour is great. But sometimes it confuses people. A colourful picture also tend to hide the pattern you want to portray. In contrast, a BW can make your patterns stand out. For example, repetitive windows might look boring with colour but when shoot in black & white, everything just looks arty. Or skyscraper against bright cloudy day also look better.

Furthermore, do you know that at certain time of the day, the ‘temperature’ of the light is different. If you shoot digital B&W, you don’t need to care about white balance and what not because no matter what, your image only have light and dark shades. As colour consideration is eliminated, you can focus on making a good composition. Gloomy weather, which is frequent in the UK, is also your best friend when it comes to B&W.

Black-and-white silhouette just look aesthetically nice. For example, the photo above. (Sorry I shot in digital). I was walking home one day and found a gap between 2 shadows. So I stood in between the shadows and make a self-portrait. I guarantee the photo would have been very boring if it was shot in colours. Furthermore, the shadows also make natural vignette.

Besides silhouette, another thing I like about BW is the shadow. As in the real shadow that forms when light cannot pass through an opaque object. The best time to get long shadow of subject is in the mid morning (9-11am) and late afternoon (3-6pm). I have also tried noon when the sun is the strongest. I thought it would result in very sharp-edged shadow but no, it doesn’t. Because the sun is on top of our head literally, so there’s no long shadow at all ha!

For example in the image above, lotus is purple, surrounded by green leaf, dark coloured water, etc. In a normal pond, there would a swamp of lotus but in this case, there’s only one lotus in a pot. I want to portray a feeling of loneliness.

For some people, when they shoot in colours, they then edit in Lightroom. No matter how they edit, they cannot bring out the emotion they want. Trust me, most of them will then convert the photo into black-and-white. Ha! (me included). If such, might as well start of with shooting in monochrome?

Shooting black-and-white with digital is too easy. That’s why I have never realised why BW in film is a skill until I tried my first roll. In digital, you see the live view from LCD. If you think your shades are overlapping, you can always edit (dodge & burn). Well, for film, you can also scan and edit in Lightroom, you can lie to others, you can never cheat yourself. 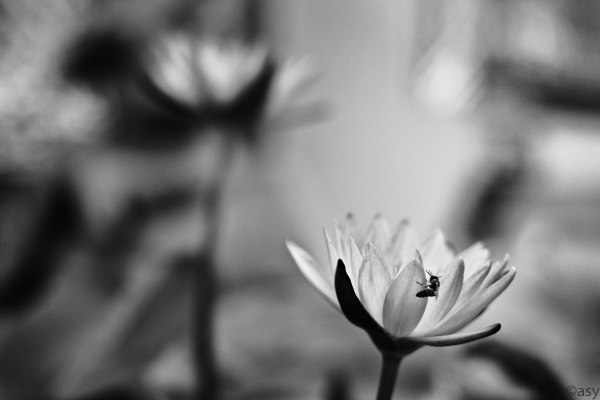 “The problem with photography is that it is too easy.”